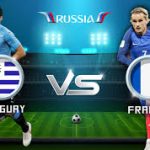 The teams of Uruguay and France meet at the Nizhny Novgorod Stadium in a match from the 1/4-finals of the FIFA World Cup in Russia. Let’s see what’s going on with these two sides before their clash on Russian soil.

Uruguay reached the 1/4-finals of the World Cup after eliminating the European champion Portugal with a 2-1 win in the previous round. La Celeste are still unbeaten in the competition, winning their group with three wins from three games played. Uruguay are showing exceptional level in defense, where players like Diego Godin, Jose Gimenez and Martin Caceres are keeping a high level of performance. Against Portugal Uruguay conceded their first and only goal at the World Cup so far, which proves how good they are when defending.

Both of the goals against Portugal were scored by PSG’s Edinson Cavani. The big problem for La Celeste is that El Matador recieved an injury during the match against Selecao. It’s still unknown if Cavani is about to start against Les Bleus. There’s a big chance to see him on the bench with Cristhian Stuani starting instead of him to partner Luis Suarez in attack. If Cavani doesn’t play in this match, this would be a huge blow for the Uruguayan team.

France qualified for the 1/4-finals after a dramatic, but impressive 4-3 win over Argentina in the 1/8-finals. Les Bleus are regarded as one of the big favourites for winning the trophy this year. The head coach Didier Deschamps have an incredibly talented squad at his disposal. This is the best French generation since the 1998-2000 era, when Les Bleus won the World Cup and the European Cup.

PSG’s Kylian Mbappe is the man to watch in this French team. The 19-years old striker did an impressive job against Argentina, scoring two goals for the win. The young star is a player with an incredible pace and technique, which allows him to be deadly in the opponent’s half. Everyone expected that Antoine Griezmann is going to be France’s big star at the World Cup, but so far the Atletico Madrid striker is being outshined by Mbappe.

Didier Deschamps’ problems here are linked to the suspension of the midfielder Blaise Matuidi. The Juventus man can’t play in this game after recieving an yellow card against Argentina. Most likely Matuidi is going to be replaced by Bayern Munich’s Corentin Tolisso in the starting eleven of the Les Bleus.

We shall expect a very tactical and physical battle between these two teams on Friday. Uruguay are proving to be a team that is very hard to play against. La Celeste have conceded just one goal since the start of the tournament. They are playing very well tactically and they will try to do the same against France. Meanwhile the European team will rely on its amazing squad to outperform the South Americans. We think that we will not see many goals in this clash, but the tactical battle will be intense.