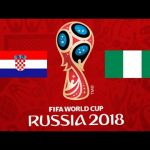 Croatia and Nigeria face each other in Kaliningrad in a second game from Group D of the FIFA World Cup in Russia. Take a look at our examination of this clash at the Kaliningrad Stadium.

Based on potential of the players, Croatia are among the best teams in the world. They have superstars who play for Europe’s biggest clubs. Arguably this country is enjoying its best football generation since 1998, when Croatia reached the 1/2-finals of the World Cup in France. Surprisingly for a lot of people, the Croats didn’t qualify directly for the competition in Russia. They had to go through the playoffs, where they got what they wanted against Greece.

It won’t be an overstatement if we say that Nigeria are one of the best African teams in the last 25 years. They are a regular participant at the World Cup, so it’s not a surprise anymore to see them at the competition. The Super Eagles are a classy team, filled with talented individuals. This year they even reached the final of the African Cup of Nations, but they suffered a heavy defeat against Morocco.

Croatia played in four friendlies since the end of the World Cup qualifiers. Zlatko Dalic’ boys enjoyed wins against Mexico and Senegal, but suffered defeats against Peru and Brazil. Facing teams from South America and Africa was a clear sign that Croatia want to prepare for the matches against Argentina and Nigeria in the World Cup group stage.

Nigeria played five friendly games since their lost final against Morocco in the African Cup of Nations. The Super Eagles didn’t perform at the best way possible, winning just one of the these five matches – against Poland. They also made a draw against Congo and suffered defeats against Serbia, England and the Czech Republic. It’s remain to be seen if these results would mean anything when the World Cup begins. One thing is for sure – for Nigeria it’s a rocky start to face a team like Croatia in its first game.

We can say a lot of things about this Croatian team. It’s enough to point out that the Balkan country have stars like Luka Modric, Ivan Rakitic, Mateo Kovacic, Ivan Perisic and Mario Mandzukic. All of them playing for some of Europe’s biggest clubs. In defense they have experienced players like Dejan Lovren, Sime Vrsaljko, Domagoj Vida and Ivan Strinic, which makes them even stronger.

Nigeria usually have talented players to show to the world. In this case we can name players like John Obi Mikel, Victor Moses, Joel Obi, Ahmed Musa and Manchester City’s ex-striker Kelechi Iheanacho. It’s true that the African team do not have a squad so impressive like Croatia’s, but they have good enough player to trouble any team out there.

Of course, Croatia are the favourite here. How we said, they have a squad which is stacked with superstars. We expect to see them starting with a win at the World Cup, although maybe it won’t be that easy. Nigeria are a solid opponent.