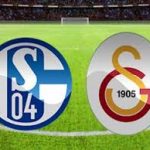 Schalke 04 hosts Galatasaray in a match from Group D of the Champions League. We are going to take a look at this clash at the Veltins-Arena in the city of Gelsenkirchen.

Schalke 04 are currently 2nd in the group with 5 points won so far and a record of one win and two draws. The Germans started their campaign with a draw against Porto at home, which was followed by a win against Lokomotiv in Moscow and a draw against Galatasaray in Istanbul.

Right now these two teams are very close to each other in the standings. How we said, Schalke 04 are second with 5 points, while Galatasaray are third with 4 points – just one point less.

Galatasaray started their Champions League campaign with a win against Lokomotiv Moscow at home, but in the next two games the Turkish club won just one point against Porto and Schalke. Despite of this, Fatih Terim’s team still have a very solid chance to qualify for the 1/8-finals of the competition. But they need a positive result at the Veltins-Arena.

In the German Bundesliga Schalke are far from convincing so far. Last season the Royal Blues performed in a brilliant way and finished second, but now they are 14th in the Bundesliga with just 10 points won from 10 matches played.

In their last match in the Bundesliga Schalke enjoyed their third win for the season, beating Hannoever 96 with 3-1 at home. Nabil Bentaleb, Breel Embolo and Marc Uth scored the winners for the Royal Blues.

In the Turkish Super Lig Galatasaray are 2nd with 20 points, being on 4 points behind the leader Istanbul Basaksehir. Right now Galatasaray are in a run of three consecutive games without a win in the Super Lig. Will this run continue against Schalke 04 in the Champions League as well?