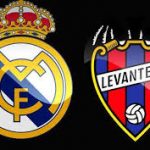 Real Madrid welcomes Levante in a match from the 9th round of the Spanish La Liga. Let’s take a look at this clash at the Estadio Santiago Bernabeu in the Spanish capital.

Real Madrid are having a very difficult start of the season under the management of Julen Lopetegui. Right now Los Blancos are 5th in the league standings with 14 points, being on 3 points behind the shocking leaders Deportivo Alaves. Real Madrid are without a win in their last three games, losing two of them.

In their last match Real Madrid suffered a 0-1 defeat during their visit to Deportivo Alaves. Once again Julen Lopetegui’s team didn’t show what was required in attack. In the same time the European champions conceded a goal in the last seconds of the game, which was very dissapointing for the fans to see.

There are already some rumours that Lopetegui could be sacked very soon. Who knows – if Real Madrid makes another mistake in the league, this could be the end for Spain’s ex-manager. Some people are talking that Real Madrid are already negotiating with the former coach of Juventus and Chelsea Antonio Conte.

Levante on the other hand are 11th in La Liga’s standings with 10 points won so far and a record of 3 wins, 1 draw and 4 losses. They were in a negative run of consecutive defeats, but in the last two rounds Levante enjoyed two wins over the current leader Deportivo Alaves and Getafe.

On paper Real Madrid are a strong favourite against Levante, of course. But right now it’s hard to predict how Los Blancos will do, because they are in a really delicate situation. They are not playing well and they are not getting the results they hope for. Could this be the end for Lopetegui?