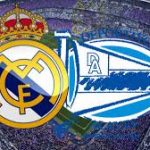 Real Madrid are heading to a first La Liga title since 2012, when they won the title under the management of Jose Mourinho. Now – five years later, The Los Blancos are on the road to triumph again, this time being led by the club legend Zinedine Zidane. On Sunday Real Madrid are hosting Deportivo Alaves on the Santiago Bernabeu and the their goal for the game could be only one – another win and three points.

Real Madrid are currently having two points advantage in front of Barcelona, but they also have a game in hand. After surprisingly losing two points in the home game with Las Palmas, Zidane’s boys stepped on their feet again and won three consecutive times against Eibar, Real Betis and Athletic Bilbao.

Deportivo Alaves on the other hand are enjoying a very successful season under the managament of Mauricio Pellegrino. They are currently 10th in the league, achieving their main goal of survival. But the more important thing is that Alaves managed to qualify for the Copa del Rey final, where they are about to meet the current holder of the trophy Barcelona.

We could say that this game is more important for Real Madrid, because the home team needs every point possible until the end of the campaign. But in same time Alaves are not a team to be underrestimated. Pellegrino’s boys managed to beat Barcelona at the Camp Nou in the beginning of the season. Meanwhile they won their last two games in the league against Malaga and Real Sociedad, which tells us that they are in a pretty good form right now.

Real Madrid are the clear favourite to get the three points in this one, but they still need to be very careful of the dangers which Deportivo Alaves keeps for them.