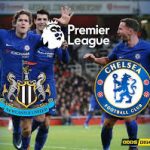 Newcastle United welcomes Chelsea in a match from the third round of the English Premier League. This match is going to be played on Sunday evening.

Newcastle started the new campaign in England with a loss against Tottenham at home, which was followed by winning a point during the visit to Cardiff City. Last season was pretty rough for Newcaste, who had some troubled moments during the campaign. Now Rafael Benitez will try to stabilize its team and keep it around the middle of the table. The most important thing for the Magpies is to stay away from the relegation zone, especially after being in the Championship just two years ago.

Chelsea had entirely different ambitions – to win the league. In the summer Maurizio Sarri replaced his countryman Antonio Conte as a manager and so far he’s doing pretty good. Chelsea started the new season with two wins, recorded against Huddersfield Town and Arsenal. The Blues really needed some change, because Antonio Conte’s second season was not what all the fans were expecting of the team. Now Sarri managed to bring some new excitement in the dressing room and it looks like it’s starting to work for the team.

Newcastle are having some problems before the game. Isaac Hayden is suspended for the match, while Florian Lejeune is recovering from an injury. Meanwhile Javier Manquillo and DeAndre Yedlin are doubtful for the clash.

Chelsea still don’t know if they can use the Spanish maestro Cesc Fabregas. He’s still recovering from a knee injury and it’s not clear when he’d be able to return on the pitch. We guess that Maurizio Sarri won’t risk with his involvement in the match. And there’s no reason to do it anyway.

Newcastle against Chelsea shall be a pretty good game to watch. We wish a good luck with this one!