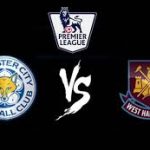 Leicester City hosts West Ham United in a match from the 37th round of the English Premier League. These are our examinations on this match.

Leicester are comfortably sitting at 9th place in the Premier League with 44 points won so far. They have a record of 11 wins, 11 draws and 13 defeats since the beginning of the campaign. In their last four matches Leicester are not showing their best form – they are without a win, losing three of their matches and making one draw.

In their last match the Foxes suffered a devastating 0-5 defeat during the visit to Crystal Palace in London. This was their third defeat in the last four matches.

Clearly Leicester are not in their best form right now, but at least they are in a good position in the league. In other words, they can finish the season without worrying that they could get relegated to the Championship.

For West Ham the situation is different. The Hammers are 15th in the Premier League standings with 35 points, just three points above the 18th Southampton and the relegation zone. Right now West Ham have a record of 8 wins, 11 draws and 16 defeats. In their last five games they won once, made two draws and suffered two defeats.

In their last game West Ham were beaten by the new champions West Ham with 1-4 at home. It was not West Ham’s best game for the season, but let’s be real here – Manchester City are just very strong this season. It was completely expected to see West Ham losing against Pep Guardiola’s team.

These are our thoughts on the Premier League game between Leicester and West Ham United. These two teams are in different situation right now and West Ham are the team which needs the points more at this moment.