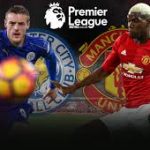 Leicester City hosts Manchester United in a game from the 19th round of the English Premier League.

Leicester are currently 8th in the Premier League standings with 26 points won so far. They have a record of 7 wins, 5 draws and 6 losses. They were in a run of four consecutive wins in the league, but their run ended with a 0-3 defeat against Crystal Palace at home. It was a dissapointing performance – especially at home ground, but now The Foxes will have the chance to redeem themselves against one of the strongest team in the country.

Manchester United are 2nd in the Premier League with 41 points won and a record of 13 wins, 2 draws and 3 losses. The Red Devils are trailing on 11 poinst behind the leader Manchester City, so their position in the title race is not good at all. But they don’t have any other option, except regroup and continue with the fight. If Manchester City starts making mistakes, then Manchester United should be perfect to capitalize on them.

In its last five matches Manchester United won four times and lost just once – during the big derby with Manchester City. This was a must win game for the Red Devils, but Jose Mourinho’s team suffered a 1-2 defeat at the Old Trafford.

Let’s have a look at the team news before the game.

Leicester can’t use the suspended Wilfred Ndidi, while Robert Huth remains injured. The good news for the manager Claude Puel come from the recovery of Matthew James, who is ready to return on the pitch.

Jose Mourinho will be without the injured Marouane Fellaini and Eric Bailly, while Luis Antonio Valencia is doubtful for the next clash. Everyone else at the Man United team is now fit and ready to play.