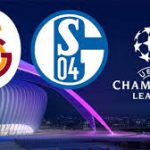 Galatasaray welcomes Schalke 04 in a game from Group D of the UEFA Champions League. Let’s see what’s going on with these two teams before their meeting at the Turk Telekom Arena in Istanbul.

Galatasaray are currently 3rd in this group with 3 points won, but being on just one point behind Porto and Schalke. The Turkish team started its campaign with a very convincing win over Lokomotiv Moscow, but in their second game they suffered a loss against Porto away from home. But how we said, the Turks are very close to the top, so they still have a lot of chances to move to a better position in this group.

In the Turkish Super Lig Galatasaray are leading the standings, having one point advantage in front of Istanbul Basaksehir and Kasimpasa. They have won 6 of their 9 matches in the league so far, being one of the contenders for the title once again.

Schalke 04 are 2nd in Group D of the Champions League with 4 points won so far. The Royal Blues started their season with a 1-1 draw against Porto at home, but in their second game they enjoyed a very important 1-0 win Lokomotiv Moscow on Russian soil.

But things are not going so well for Schalke in the Bundesliga. Shockingly for many people, the Royal Blues are currently 16th in the league standings with just 6 points won from 8 matches played. This is certainly not Schalke from the previous season, when the team finished 2nd in the standings, only behind the champion Bayern Munich.

In conclusion we can say that this match between Galatasaray and Schalke 04 is not easy to predict. Galatasaray showed their strenght at home against Lokomotiv Moscow in the first round, but Schalke are still unbeaten in the competition.