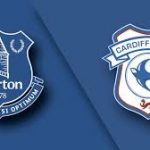 Everton hosts Cardiff City in a match from the 13th round of the Premier League. Let’s take a look at this clash at the Goodison Park in Liverpool.

Everton are currently 9th in the Premier League with 19 points. The Toffees have a record of 5 wins, 4 draws and 3 defeats since the beginning of the season. In their last five games Marco Silva’s boys won three times, made one draw and suffered just one defeat – against Manchester United at the Old Trafford.

In their last fixture Everton made a 0-0 draw during the visit to Chelsea at the Stamford Bridge. For them it was a pretty good result to avoid losing at a difficult ground like this. Winning a point away against Chelsea it’s always a solid achievement.

Everton’s goals this season is to finish in the Top 6. Right now they are just one point behind the 6th Bournemouth, so they are close to their goal. They just need to be as consistent as they can.

Cardiff City are in a very different position at the moment. The Welshmen are 18th in the league with 8 points, currently being positioned in the relegation zone. Cardiff’s record since the start of the campaign shows 2 wins, 2 draws and 8 defeats. In their last five games they won twice and suffered three defeats.

In their last game Cardiff achieved their second win since the start of the season. Neil Warnock’s boys beat Brighton & Hove Albion with 2-1 at home. It was Callum Paterson and Soulemayne Bamba who scored the winners for the Welsh team.

That’s our thoughts about the Premier League fixture between Everton and Cardiff City at the Goodison Park. Surely Everton are the favourites here, but Cardiff’s confidence is going to be improved after their win in the previous round.