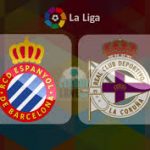 Espanyol hosts Deportivo La Coruna in a match from the 6th round of the Spanish La Liga.

Both teams didn’t start the new season in the best way possible. Espanyol are close to the relegation zone and Deportivo are currently in it. Let’s see where exactly they are.

Espanyol started the new campaign with a record of one win, two draws and two losses. They are currently 16th in the standings with 5 points won so far. In their last match Los Pericos shared the points with Villareal for a 0-0 draw at the El Madrigal.

Deportivo La Coruna on the other hand are 18th in La Liga with just 4 points won from the first five rounds. They have a record of one win, one draw and three losses. They achieved their only win so far in the last round, beating Alaves with 1-0 at home at the Riazor.

So far we can’t say that these two teams look ready for something remarkable this season. If they continue to perform like this, most likely they are going to struggle in the battle against relegation.

Espanyol will be without the injured Adrian Lopez, while Javi Lopez and Oscar Gaitan are doubtful with injuries. The good news are that Alvaro Vasquez recovered from his latest injury and he’s once again ready to enter the pitch.

Deportivo’s manager Pepe Mel can’t use Pedro Mosquera, Ruben Martinez and Carles Gil, who are injured. Adrian, Sidnei and Juan Lamas remain doubtful for the match with injuries. The good news are that Zakaria Bakkali, Bicho and Borja Galan are not longer injured and they are ready to return on the pitch.

The La Liga standings are telling us that these two teams started the new season in a pretty similar way, so it’s hard to say which one is the favourite here.