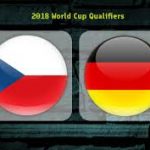 Czech Republic hosts Germany in a match from Group C of the World Cup qualifiers.

Far from surpising, Germany are the strongest and most dominant team in this group. The world champions are flawless with their performance so far, having won six matches out of six so far. They have a perfect record of 18 points and they look untouchable at the top of the group.

Far more impressing is Germany’s goal difference at the moment – 27:1. This shows us exactly how dominant Joachim Low’s team is during this qualifying campaign. 27 goals scored and just one goal conceded in six matches – this is purely impressive.

For Czech Republic it would be good to win a point or three against Germany, but probably they know by themselves how difficult this would be. Germany are perfect in their campaign so far, so it’s hard to think that they would lose a point until the end. But it’s football, so everything could happen.

Czech Republic’s record so far is two wins, three draws and one loss. Goal difference is 9:5. They rarely score goals, but rarely concede as well. Will this help them against the world champions?

Germany are the favourite in this game, of course, but maybe the home ground will give the Czech Republic some bigger chance in this game. They are still in the mix for the second place, but they must win as much points as possible, if they want to qualify. And in same time they must hope that Northern Ireland are going to lose some.