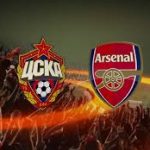 CSKA Moscow hosts Arsenal in a second leg from the 1/4-finals of the Europa League.

The Russian team is in a very complicated situation after losing the first leg in London with 1-4. This gives Arsenal a huge advantage before the rematch. It’d be a huge shock if the Gunners don’t reach the 1/2-finals, but we have seen it all in football. So, who knows?

It was a masterful performance by Arsenal in the first leg. Arsene Wenger’s team dominated entirely over CSKA and scored four goals in their opponent’s net. Golovin’s goal for CSKA saved some chances for the Russians, but they must do something historical in order to progress.

The truth is that CSKA missed their chance to achieve a good result before the second leg. It’s always difficult for the visiting teams to play in Moscow, because of the huge distance and the cold weather. But with a result like this, Arsenal are already seeing themselves in the next phase of the competition.

For Arsenal’s manager Arsene Wenger it’s important to win this trophy. Everyone expects to see the French tactician leaving the club in the summer. He has a contract until 2019, but most likely he will leave after the end of the current season. Europa League is his only chance to leave the club with a trophy.

Plus, this is Arsenal’s only chance of reaching the Champions League next season. The club lost its chances to finish in the Top 4 of the Premier League, so they don’t have any other opportunities, but this. It won’t be easy, but Arsenal are one of the favourites in the competition right now.

This is our take on the Europa League clash between CSKA Moscow and Arsenal. We wish you a good luck!