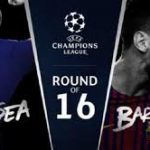 It is time for a great football rivalry to be ressurected once again. Tonight Barcelona wil enter the Stamford Bridge in London to face Chelsea in a first 1/8-final from the UEFA Champions League.

There’s a historical rivalry between those two clubs. In the last more than ten years they had some memorable clashes in the Champions League, especially in the knockout phase of the competition. For the last time they met in 2012, when Chelsea eliminated Barcelona in the 1/2-finals phase and won the competition afterwards. Now Barca will try to gain revenge from the Blues.

This season is very different for both clubs.

Chelsea are struggling in the Premier League. Last season they won the title in Antonio Conte’s first season, but now they are already too much behind the leader Manchester City. Taking into account that Chelsea were already kicked out from the Carabao Cup, the Champions League and the FA Cup remain the only options left for a trophy this season. And the Champions League is the more prestigious from the two, of course.

Meanwhile Barcelona are very close to return on the top of Spanish football. Barca are still unbeaten in La Liga, playing amazingly effective under the guidance of their new manager Ernesto Valverde. The experienced tactician made the team better in defense, while keeping its offensive edge. Now Barcelona are a really fearsome team to meet.

Just like in any other big clash, there are certain players who shall decide this one. Chelsea will rely on stars like Eden Hazard, Cesc Fabregas and Alvaro Morata to penetrate Barcelona’s defense. Meanwhile Barca have strikers like Lionel Messi and Luis Suarez to score the vital away goals.

This is a football classic in the making. Both teams want to reach the final of the competition, but only one of them will move to the next phase.