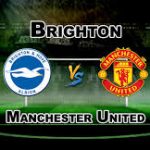 Brighton & Hove Albion welcomes Manchester United in a match from the second round of the English Premier League.

Brighton & Hove started the new season in a negative way, losing its visit to Watford with 0-2. Last season Chris Hughton’s boys managed to keep their place in the Premier League, but clearly it won’t be easy to do it again. The competition for a place in the division is pretty fierce, so Brighton & Hove are really going to need some points in order to survive. The team had some chances against Watford at the Vicarage Road, but two goals from Roberto Pereyra guaranteed the three points for Watford.

Manchester United started the new season with a win, winning at home against Leicester City. Paul Pogba and Luke Shaw scored for the Red Devils, who would like to make it two in a row at Brighton. Given the fact that last season Manchester City won the league with the amount of 100 points, Jose Mourinho and his boys know very well that every point is going to me important in the title race.

Most of the people say that the atmosphere in Manchester United’s dressing room is not good. Jose Mourinho is not happy with the board, while he also have some problems with some of the star players, like Paul Pogba. The team managed to win against Leicester, but can they continue like this with so many internal problems in the squad?

Last season Manchester United finished 2nd in the Premier League, so now the goal is the title. But can they do it? If they want to, they need to win matches like this one.

This is our look at the Premier League clash between Brighton & Hove Albion and Manchester United. Whatever you have decided, we wish you good luck with this one.