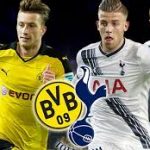 Borussia Dortmund hosts Tottenham Hotspur in a match from Group H of the UEFA Champions League.

Borussia Dortmund dissapointed a lot of people in the Champions League this season. In four round being played, Dortmund won just two points – during the the draws against the underdog APOEL. Everyone expected to see the German club battling with Tottenham and Real Madrid for one of the first two places, but in the end they started looking like an outsider in this group.

Dortmund are usually a team which performs strongly in the Champions League, but this season they are far from their usual levels. Now their main goal remains finishing third and qualifying for the Europa League. They still have theoretical chances for finishing second in the group, but it’d be a miracle to see them getting this place instead of Real Madrid.

As for Tottenham, maybe they surprised a lot of people in a positive way this season. Last year Tottenham were unable to qualify through the group stage, but now Spurs are leading a group with Real Madrid in it. The London club have 10 points from four games played, including beating Real Madrid at the Wembley. This was a crucial win for Tottenham, because it made them lead the group.

Tottenham are a team which is constantly developing under the guidance of Mauricio Pochettino. They have quality players and one of the best young managers in the game right now. Surely their ambitions in the Champions League this season will be high. There’s no doubt about that.

If Tottenham win this game, they guarantee themselves the first place in the group. That’s a huge motivation to win at the Signal Iduna Park. But how we said, Dortmund are still not done in this group. If they want the third place, they must secure it.