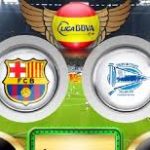 The current holder of the trophy Barcelona faces Deportivo Alaves in the Copa del Rey final at the Estadio Vicente Calderon in Madrid.

After being defeated in La Liga and Champions League, the Copa del Rey is the only remaining chance for Barcelona of winning a trophy. If they manage to beat Alaves on Saturday night, they will win the trophy for a third year in a row.

This is going to be Luis Enrique’s last game as Barcelona manager. He’s leaving the job after three years at the Camp Nou, in which he won La Liga, Champions League, Copa del Rey and the FIFA Club World Cup. Most likely he’s going to be replaced at helm by Athletic Bilbao’s manager Ernesto Valverde.

Barcelona are the most dominant club in the history of the competition. They have won the Copa del Rey 28 times in their history and three times in the last five editions of the tournament.

As for Deportivo Alaves, they are preparing to participate in the Copa del Rey final for a first time in their history.

Both teams have won against each other during the La Liga season. Alaves shockingly beat Barca at the Camp Nou in the beginning of the season. But in February the Catalans avenged their surprising loss, beating Alaves with 6-0 away from home.

The big absence in Barcelona’s squad for this game is Luis Suarez. The Uruguayan striker is suspended for the final, so most likely he’s going to be replaced in the starting line-up by Paco Alcacer. Lionel Messi and Neymar will have to lead Los Cules towards the win, while Busquets, Iniesta and Rakitic are expected to start in midfield.

As for Deportivo Alaves, we expect to see Christian Santos leading the attack, supported by Camarasa, Manu and Ibai, who are going to attack from midfield.