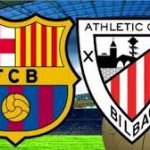 The La Liga champions Barcelona welcome Athletic Bilbao at the legendary Camp Nou and they don’t have any other option, but winning this game. Especially if they want to keep their chances of defending their title.

Last weekend was not very good for Barca, with Luis Enrique’s team losing two points in the away game versus Real Betis. In same time the current leader Real Madrid won against Real Sociedad at home, expanding their lead in front of Barca to four points. And we shall not forget that the Los Blancos still have a game in hand.

After winning La Liga two consecutive times with Luis Enrique at helm, this season Barcelona are not looking consistent enough to challenge Real Madrid for the gold medals. Of course, there are still many games until the end of the campaign, but Barcelona most certainly won’t win the title, if they do not reduce their mistakes in the league. Especially with Real Madrid rarely making any wrong steps so far.

Now Barcelona will have to deal with the always solid team of Athletic Bilbao. The Catalans already eliminated the Basques from the Copa del Rey tournament, but every game in football is different, so what happened in the Copa del Rey is not going to be important on Saturday.

Barcelona’s captain Andres Iniesta recovered from his last injury and he’s once again ready to play. The same can’t be said about Sergio Busquets and Lucas Digne, who continue their recovery.

Athletic’s manager Ernesto Valverde will be without the services of Sabin Merino and Kepa Arrizabalaga, who are still injured. Mikel Vesga is doubtful for the travel to Camp Nou, while Xabier Etxeita, Ager Aketxe and Aitor Seguin are fully recovered and once again fit to play.

We should expect an interesting and competitive game at the Camp Nou between two teams who know how to play good football.